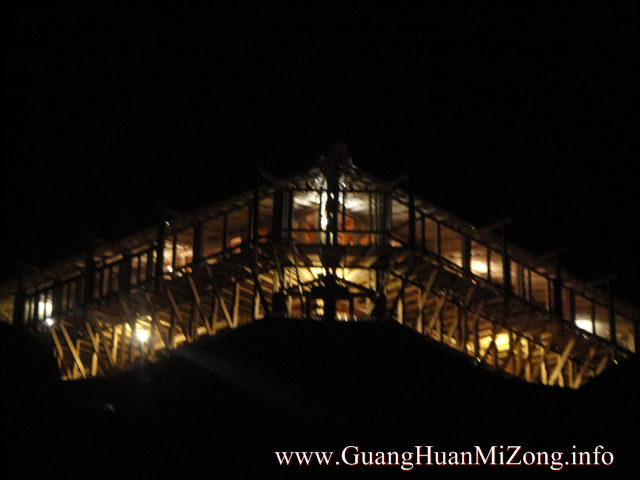 – The Compassionate Ship of Deliverance

When the great Holy Master Ziguang Shang Shi, stood in the Great Brilliance Hall, and announced with his penetrating voice that the New Noah’s Ark had been built in the Western Shrine, the good news echoed around the world. The new Noah’s Ark is so majestic that it transcends thought and imagination; people can hardly find words to describe it. The ark emits great boundless light in the quiet night sky. It is like a shining pearl that illuminates the whole universe.
Ziguang Shang Shi carried out sacred teachings on the incredible miracles taking place, and instructed sentient beings with penetrating words about the various social phenomena that go against the heavenly principles.
The Holy Master stated the new Noah’s Ark is a project for the Dharma Vanishing Era. The purpose of its birth in the Western Shrine is to save people with affinity and help people to escape from disasters. It is the will, the mercy and providence of the Buddha. It is a blessing for every earthly creature. It is the good luck given to people with affinity!
At present, tragedies and conflicts frequently occur; people’s morality deteriorates. A man, a group or a country is often shortsighted and blinded by temporary interests. They do destructive deeds, laying the foundation for disasters on the earth and bringing countless potential calamities to future generations. With the endless emergence of phenomena that are against the way of nature, the new Noah’s Ark carries a special mission in the present era. It shines a bright light for people’s enlightenment and provides a sanctuary for wandering souls before the end of the world, as predicted in Mayan prophecy. The Holy Master called it a ferry of compassion due to its shape and spirit. It is not only a refuge to escape from disasters; it also leads to true illumination and happy rebirth.
The earth is merely a speck of dust within the boundless universe, even more so human beings. In general, people are still short-sighted. Many people lose their direction; they cannot distinguish between true and false, right and wrong. They can’t find the way out. They can’t breakthrough themselves.
People who go astray need the guidance of Ziguang Shang Shi in order to free themselves. The grand emergence of the new Noah’s Ark offers an opportunity for these people. Their body and soul as well as their vision and intellect will reach new heights. An unprecedented state of being will arise.
Located at the top of the Western Shrine, the new Noah’s Ark always shines with bright light, a beacon of hope for the earth and its people.